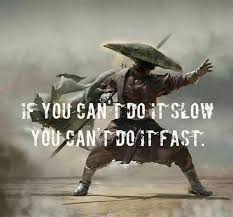 (Or, why “fast twitch and slow twitch” might not mean what you think they do.)

I work with a lot of people who have strain injuries of one sort or another. A strong number of those are people who blow me away in almost every physical category, yet who I can either toss around at will, or else who are desperately trying to avoid becoming a wreck as strain injuries they don’t know how to handle gradually pile up.

After seeing a lot of people who have worked really hard while being blatantly mal-trained (as, to be clear, I was myself during ten years as a savateur), a lot of the problem seems to be a culture floating around the physical fitness industry regarding “fast twitch” vs “slow twitch” muscle fibers. The athletic world and the world of “movers” in general (athletes, martial artists, dancers, etc) puts a LOT of emphasis on explosive movement, and hence on “fast twitch” muscle fiber. And that’s because it’s instantly and intuitively obvious that without the ability to move explosively, your ability to participate is greatly limited.

And in an athletic contest where one person can move explosively and the other cannot, the outcome is a foregone conclusion unless the latter has a huge experience/training advantage (in my world of fencers and fighters, what we call “scary old man syndrome”).

The problem is that while most competent trainers know the difference between these muscle fibers, not all of them understand the neurology of their use and why they exist in the first place, and thus there is a huge over-emphasis on explosive-movement training, at the expense of carefully-detailed movements.

Again, to be clear: competent personal trainers know this stuff. And quality teachers know this stuff (I worked last week to help an older gentleman who runs a dance company — you had better believe he knows the difference between smooth and explosive, and which belongs where!)

But the Internet has a habit of repeating things in a sort of dumbed-down way, and a lot of people are absorbing mis-stated information in a way that’s resulting in injuries.

You have two basic types of muscules: postural muscles, and phasic muscles. If you cook a turkey, the postural muscles are the “dark meat,” and the phasic muscles the “white meat.” (Look at where that meat sits on a turkey… it becomes pretty obvious why each is where they are pretty quickly!)

The postural, aka “slow twitch” muscles are weaker — dramatically weaker — than the “fast twitch” phasic muscles. But “fast twitch” doesn’t mean “faster to execute.” The “Twitch” in these fibers’ names is in regard to how quickly they exhaust. “Slow twitch” fibers are called that because they may not be strong, but they’re long-lasting, and they come into action before the phasic muscles do.

No vertebrate could survive out of water with rapidly-exhausting postural muscles.

Easy example: postural muscles work all the time to counter-act gravity, mostly without any conscious awareness on your part. But ever accidentally exhausted the muscles in your jaw? Wasn’t that fun?

So why does this matter, and where does the Feldenkrais Method come in? Well, put simply, for you to avoid injuring your joints with explosive movements, you need to be able to get yourself into an alignment where you can muster your awesome athletic and artistic forces properly. The slow-twitch fibers are actually the first to be recruited once you have an idea of the movement you intend to do, in order to get your skeleton into position to “do the thing” properly so that you can jump, throw, swing, twist, dive, etcetera, easily, fluidly, and without strain.

Otherwise, even if you’re not in a squat rack, performing these activities with bad alignment tears up your body just as surely as would trying to perform a heavy squat or deadlift while standing knock-kneed. Anthony Bourdain, before he passed, used to lament the long-term damage he’d done to his hand just using a whisk. And any string musician can tell you what “bad form” will do to your wrists and elbows.

Conversely, strenuous, explosive actions look and even feel easy, when you have “good form,” that is, when your skeleton is properly aligned to express the work that the phasic muscles are about to bust out (on your opponent, in your performance, etc).

From an actual conversation I had just last night after I was riding a beginning fencer on his lunge form and talking about why I did so with a couple of veteran bystanders:

‘What do you call a fencer with good knees?’

One of the places where The Feldenkrais Method excels is in helping people to get a better grip on just what they’re doing with their postural muscles, so that when they do “bust the moves,” they suddenly find that they’re not having to work so darned hard to do it. So comfort improves, endurance improves, and repetitive strains diminish.

As an athlete or “mover,” you don’t have to endure all that constant pain. By working with your breath and balance and how you prepare yourself to perform any given activity, you can rediscover what it’s like to move freely and easily, so that even after strenuous activity, you can enjoy “the good sore,” not “the bad strain pains.”

Practice doesn’t make perfect: in the words of Loris Beckles, “practice makes consistent.” Whether that’s “consistently pleasant” or “consistently painful” is up to you.

As a side note, if that discussion about fencers and knees hit a little too close to home, check out Basic Body Mechanics for Martial Artists, a book written by somebody who’s been there, for those who would prefer not to be.

Stumbled onto a great little article about stretching and yoga, entitled “Stretching doesn’t work (the way you think it does).” One of the “money quotes” I’d like to discuss this week is the following:

She discovered this idea – that if we stretch more and stretch harder that our tissue will change – was untrue. In reality, we are not lumps of clay that can be molded by persistently tugging on things. This is because our nervous systems are running the show.

This is exactly correct. Even massage fundamentally is not about taking clay and mashing on it until the client magically becomes “relaxed,” but introducing changes into tissue so that peoples’ nervous systems can recognize the change and make adjustments.

The author to which the blogger is referring is dead on the money, and the people who aren’t improving aren’t gaining flexibility as they stretch because their nervous systems have them on “lockdown.” And that happens for very, VERY good reasons. There’s a part of you I call “the cash register” that knows the exact status of every muscle — and muscle fiber!– in your body, and it will not allow those muscles to lengthen if doing so would threaten your balance. Because we are bipeds and for us, balance is literally synonymous with survival.

So if you’re a yoga practitioner who wants to get into an asana, or a yoga instructor who wants your clients to be able to get into and then stay in an asana long enough to reap its very deep benefits, the first thing you have to recognize is that you’re not an assembly of mechanical joints needing oil – that old mechanistic vision has been outdated for decades now.

No. You’re a thinking, breathing being making thousands of assessments per second about how tight or loose you need to be for a given situation — you do not want to be super-flexible and hyper-mobile when squatting three times your bodyweight!

The great strength of The Feldenkrais Method is that we go straight to the source and teach the nervous system directly. And the great news about that, is that the better you get at learning, the more that learning generalizes and the less and less you have to be trapped inside a box where one of these two fitness pictures strikes you as “I can do that!” but the other one is synonymous with “no wayyyyy.”

No, not the CIA thing where people imagined themselves drawing pictures of enemy infrastructure. It would be a very different world if we could imagine what our friends and loved ones were doing throughout the day…. accurately. Maybe it would even be a better one, though I suspect most of us would consider it a markedly creepier instead.

In this case, I’m referring to a lovely article demonstrating that we handle tools as if they really were “extensions of ourselves,” in spite of the face that said tools don’t have any nerves with which to help us sense with them. We can tell how things make contact with inanimate objects we’re holding. How cool and weird is that?

Turns out, it’s super cool….but not at all weird.
You see, your bones don’t have nerves, either. So all our sensing of what happens with our bones is indirect and “through a mirror darkly.” That’s why descriptions of bones cooperating in traditional cultures frequently fall back on ideas like “chi flow” (e.g., if you’re a Tai Chi player, peng, ji, lu, an). If you’re well-organized, you can feel something moving around and providing support out to your head or hands, but… “what is that darned thing I’m feeling?”

And if you’re sore as heck and not sure why you’re sore as heck, figuring out what it is you’re feeling gives you better access to those bones, as well as whatever tools you happen to be holding at the time, and how to use all of them better.